Many of you know that you can pick up the phone and call us with questions (no charge, by the way . . .) that come up in the process of understanding what happened in your accident claim.

Perhaps one of the most often-asked questions is: "If I know the length of a skid mark, can I calculate the speed of a vehicle?" The answer to this question is a very qualified "yes", meaning it can be done, but you need to know a lot more about the accident than just the length of the skid.

A common formula used by police agencies for determining the speed of a vehicle (in mph) at the moment skidding begins is:

Drag factor is where many adjusters (and investigating officers) get fouled up. This is because the drag factor for a specific vehicle in a specific accident can't just be plucked from a table of values and inserted in the equation. Although this will work in some cases, often the tabular value must be adjusted based on other variables, such as wheel disablement, front/rear vehicle weight distribution, anti-locking braking, braking efficiency, and roadway grade.

Initial velocity is commonly miscalculated by investigating officers at the scene who measure a set of pre-impact tire marks, then estimate velocity by using the "30fd" part of the equation above and adding the result to an estimated impact speed. 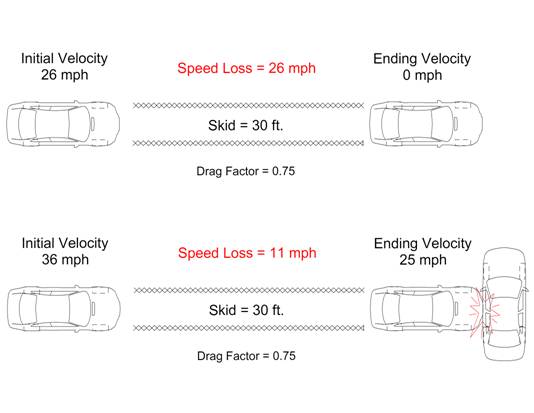 Case in Point: An Insured vehicle impacted a Claimant vehicle, that was turning left in an intersection, and left 30 feet of pre-impact skid marks on the roadway. Based on the amount of damage on the Claimant vehicle, investigating officers estimated the impact speed at between 20 - 25 mph. They then used the "30fd" part of the equation above, came up with a "speed loss" of 26 mph, and added it to the estimated impact speed. (See illustration above.) The Insured was cited for traveling at 46 - 51 mph in a 35 mph zone, and was deemed responsible for the accident.

When we were asked to look at this case, we advised the adjuster of the error (actual speed loss from skid was 11 mph), noting that the correct speed calculation in this case should have been 33 - 36 mph, right in line with the speed limit.